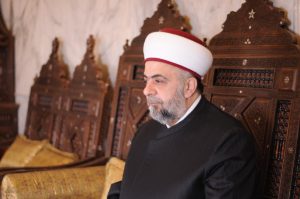 of Allah the Most Gracious, Most Merciful

Date of Birth and Marital Status

Married and have three children.

Degree in Economy and Trade from Damascus University in (1983), faculty of Business Administration.

Master’s Degree for his dissertation (Jurisprudence in Islamic law) in (1997) from the University of Islamic Studies.

PHD in the (Jurisprudence of the Group and Contemporary Jurisprudence Complexes) in 2000 from the University of Islamic Studies.

Certificate of Merit and High Appreciation with the rank of (Scholar and Thinker), equal to the international degree (PhD) in 2007 from the Open University of Islamic Civilization in Canada.

Certificate in Interpretation from Al-Azhar University.

Appointed as Assistant of the Minister of Endowments (Awqaf) by Decree No. / 197 / dated 25/6/2002 issued by the President of the Republic.

Imam and preacher of Al-Omari mosque in Tartous from 1986 then preacher and teacher in Sayyedah Khadijah Mosque till now.

Visited many Arab, Islamic and European countries and his visit had a good impact in spreading the moderate Syrian Islamic thought.

(The Comprehensive Interpretation of the Holy Qur’an (Al-Tafsir Al-Jami’.

The Word of Truth.

Studies about the Holy Qur’an.

Doctrinal foundations in the face of Takfir (Accusing of disbelief) and extremism.